Block House Creek, the 2,188 home subdivision on the line of Cedar Park and Leander, has just earned the admirable title of “Greater Austin’s No. 1 Carpooling Neighborhood” and a $500 donation by Carma Carpooling. 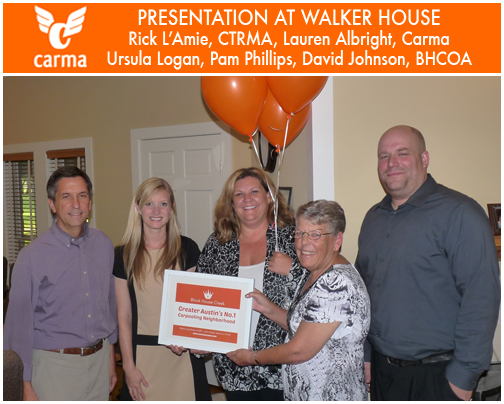 Carma, the real-time carpooling network that launched in Austin earlier this year, ran an awareness campaign in the area encouraging residents to carpool to improve their commute. One neighborhood in particular embraced the idea of putting empty seats to good use: Block House Creek. Its location right along the 183A toll road, where carpoolers can earn toll reimbursements through Carma and its partnership with the Central Texas Regional Mobility Authority, made it a perfect environment. Residents used Carma throughout the spring and summer to find neighbors with matching commutes. From February to today, neighbors have shared nearly 3,300 carpool trips together.

Carma took notice of the neighborhood’s carpooling ambassadorship, and to thank them for helping grow the Carma network so significantly, made the pledge to donate $1 to the Block House Creek Owner’s Association for every carpool trip taken by the neighborhood during the month of September. By the month’s end, an impressive 500 carpool trips were taken by neighbors over 30 days!

As a result, Carma donated $500 to the Owner’s Association this week. Pam Phillips, Board Member of Block House Creek Owner’s Association, said “The news is fantastic!” when she was given the achievement numbers. The $500 donation will be used to support the Association’s “Buckle Up Block House” Project, a series of signs at neighborhood exits to remind residents to buckle their seatbelts and not text while driving.

“Carma’s contribution is very much appreciated. We could have never imagined that your contribution would be that much, but we are so thrilled,” said Phillips. Lauren Albright, Community Manager for Carma, said, “We had high hopes that neighborhoods in the area would embrace carpooling, but we were blown away by Block House Creek’s achievements. They’ve demonstrated how sharing rides can not only
help reduce commuting costs, fight traffic, but also bring neighbors together around a common goal. They’ve set an exciting example for other neighborhoods in the Austin area.”

Check out the positive impact the Carma members in Block House Creek made in September:

Carma Tells Us How to Join!

Neighbors, if you haven’t tried Carma yet, it’s free and simple to join! Visit www.carmacarpool.com/austin to download the Carma Carpooling app for iPhone or Android phones. The app will walk you through how to set up your profile, commute schedule, register for 183A toll reimbursements, and it will then display your neighbors nearby who have matching commutes. You can message them and connect to share a carpool. Email us at austin@car.ma if we can ever assist you!

Carma is a world-leading company in real-time carpooling technology, enabling people
team up to improve their commute, headquartered in Cork, Ireland and with offices in
San Jose, CA, and Austin, TX.

Carma’s Austin program is testing the benefits of real-time ridesharing technology and
how it affects toll road travel behavior and traffic congestion. The pilot is funded through
the Federal Highway Administration and developed in partnership with Texas
Department of Transportation, Central Texas Regional Mobility Authority and Texas
A&M Transportation Institute. As part of this program, Carma carpoolers receive toll
rebates on the 183A and Manor Expressway toll roads. For more information visit
www.carmacarpool.com.